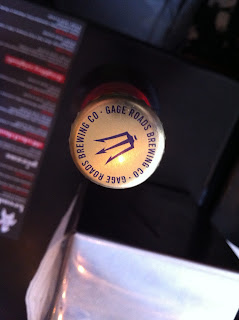 The Low Down:
The second Beer we enjoyed with our lunch-time pizza was a Western Australian IPA.

The First time I drank Gage Roads was the lager, at a friends 18th Birthday party, however this IPA is a different beast. Very dry and crisp with a hoppy floral finish.

Another beer matched well to Pizza (are there any that aren't?).

The tagline reads "Knock the top off this sleeping giant and awaken the taste within" and it's not far from the mark. Inside is a bold beer that has many subtle flavours under the initial dry ale flavour. 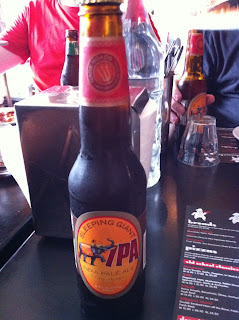 Packaging: 7/10
Orange is my favourite colour. The earthy tones match the hop flavour inside.
Refreshment: 8/10
So dry and crisp that it goes down a treat.
Flavour 8/10:
A good example of how a pale ale should taste, a little drier than others, but not to its detriment.
Alcohol Content: 6/10
5.4%. Indian pale ales are rumoured to have been brewed stronger, as a preservation technique in the 1700s. It's not true of course, but breweries in modern times may not know that.
Price: 8/10
$3.25 because once again, we grabbed a six pack.
Total: 37/50 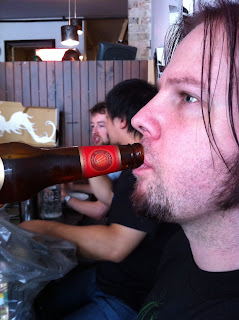 Conclusion:
This will become a favorite, especially as it is available a few blocks from my work. A neat example of an IPA. It feels like a hunters beer, so serve it around a camp fire, while dining on wedge tailed eagle, Siberian tiger, and man.
Cheers
Posted by Unknown at 3:08 PM